Mark Twain said, "It 's easier to fool people than to convince them that they have been fooled".
Homer is a constant source of frustration for archaeologists, for philologists and all commentators ... hundreds of pages with thousands of names, events, references, locations, etc. But they end up confusing rather than help us to clarify them. But if the solution was different from those painstakingly elaborated over the centuries by writers? Why Homer continued to praise the art of deception? Because he slept ... or because it is he who has deceived all of us for 3000 years? And the myths are only fairy tales, or are born from real events of which we just begin to glimpse the origin?

Seven articles of Alberto Majrani on the site of archaeologist Pierluigi Montalbano with automatic translation (you can click on google translator and select INGLESE as language)
http://pierluigimontalbano.blogspot.it/search?q=majrani

Many other abstract in italian here from the new book by Alberto Majrani entitled L'ASTUTO OMERO The CUNNING HOMER – Ulysses, Nobody, Philoctetes and the ingenious deception of the Odyssey

HOW WAS THE BOW OF ULYSSES MADE? AND WHY WERE THE SUITORS NOT ABLE TO TEND IT? 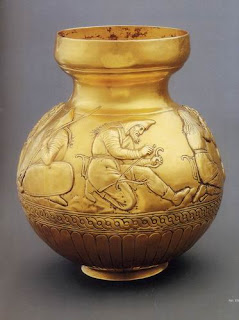 As you can see in the photo, the notches where the string should be inserted are now on the INTERNAL side of the bow in the rest position, but would be correctly located on the outside once the overturning operation has been completed. These in the image are in the medieval museum of Bologna, they are Turkish weapons of the seventeenth century, but in any case the technology has remained unchanged for millennia, as we see in an amphora of the fourth century BC, found in the kurgan of Kul'Oba, now in the Hermitage in St. Petersburg, showing a Scythian warrior crouched in the act of stringing his bow. Behind the back you can see the gorito, the typical case for the bow and arrows. Below, Scythian archer, from Vulci, 510 BC, and operating scheme of the compound arch (from Le Scienze, August 1991). These are the so-called Scythian-type arches, which were widespread everywhere, but which take their name from the Scythians, a population of nomadic horsemen who roamed a vast territory of the steppes from Siberia to the Black Sea. A legend, collected by Herodotus, tells that Hercules had conceived three children with a mysterious serpent woman, and had left her one of his two bows so that he would give it as an inheritance to that of his children who were able to hold it. The winner was called Scythian (or Scite) and would have been the progenitor of the people of the Scythians. The analogies with the events we have told so far are evident. As is often the case, myths tend to repeat themselves in a similar way in different places and times. We had seen that the wound in Philoctetes' foot was caused by a snake (according to Homer) or by one of his own arrows (according to other versions): but perhaps one thing does not exclude the other! The Scythians were in fact famous for the poisons they used to make their arrows more lethal, which were prepared with a deadly mixture of dung, rotten human blood and viper venom; moreover, the arrows could be equipped with hooks that broke in the victim's body when an attempt was made to extract them: therefore the description of Philoctetes' infected wound, painful, putrid and stinking, which can only be healed with a complicated surgical operation, agrees perfectly with the damage done by a Scythian arrow. Chemical and biological wars are not an invention of modernity! Furthermore, as Professor Giuseppe Girgenti points out, the Greek adjective "toxic" (τοξικός) derives from the Greek term τόξον, which means "bow" (but also "rainbow"), and was an attribute of the bow and arrow deities, namely Apollo, Artemis and Eros. Heraclitus attributes to Apollo the harmony of the bow and the lyre, and Plato, in "Cratylus" (405a) argues that there were four typical arts of Apollo, namely "music" (μουσική), "prophecy" (μαντική), the "medicine" (ἰατρική) and the "toxic art" (τοξική), which is precisely the art of the archer. Now, it was customary in the Greek world to smear the arrowheads with a poison, the so-called "toxic drug" (τοξικόν φάρμακον), which was to be lethal in war, or only serve to stun large animals during hunting, such as horses and elephants (as Aristotle, Strabo and Aelian tell us). But from here the adjective "toxic" has come to mean something poisonous or in any case something pharmacological that has the effect of stuning and numbing, that is, all kinds of drugs. And now Philoctetes stretches the bowstring, takes aim, shoots the arrow and inserts the rings of the twelve axes on the first shot, to general amazement. And Telemachus stands next to him fully armed: it's time to change targets

Why "THE CUNNING HOMER"?

Who really killed the suitors? Was it Ulysses who make the slaughter, or did someone else help Telemachus? Who could truly be the mysterious stranger, who came to Ithaca after twenty years and nobody was able to recognize? A careful reading of the Odyssey reveals the myriad of indications left by Homer for the surprising solution. Ulysses was not ...Ulysses, but the best of the achean archers: Philoctetes! With this key, the Homeric poem has suddenly taken an unsuspectables logic and a consistency . And the surprises do not end here!
You can find many abstract of the italian book here http://astutoomero.blogspot.it/2016/05/parte-prima-chi-come-e-perche.html If you are a publisher, or a journalist, or simply interested, please contact me! alberto.majrani@tiscali.it

These articles are excerpt from the new book by Alberto Majrani entitled L'ASTUTO OMERO The CUNNING HOMER – Ulysses, Nobody, Philoctetes and the ingenious deception of the Odyssey

The first version of the book (in Italian) can be bought on Amazon.

a concise collection of opinions on this book, made by those who have been able to read the first edition or the new preview draft: Giulio Giorello (preface): “A well-found solution”. Cinzia Bearzot, Greek scholar, Catholic University of Milan: “Convincing, funny, very well written”. Fabio Negrino, archaeologist, University of Genoa: “Suggestive and well-argued hypotheses”. Franco Malerba, the first Italian astronaut: “I read with genuine curiosity the investigation Ulysses-Philoctetes which I found convincing.”. Lowell Edmunds, Professor of Classics at Rutgers University (USA): “Dear Alberto, your book seems to me extremely clever”. Benedetta Colella, teacher: “How much I laughed when Alberto Majrani revealed to me that he, a naturalist, had solved the thousand-year-old question! After reading his book, with all the intentions to crush him, my prejudices ran aground on the rocks of uncertainty. What if he's right?”. Anna Lucia D'Agata, archaeologist: "Interesting hermeneutic and narratological analysis" Cristiana Barandoni, archaeologist: “I read it in one breath and, what can I say, I am dazed! First of all for how you write, then the content was added to the form. And a reflection: literature and criticism, very abundant, often leave little room for new interpretations. But if we want to be "philosophers" we must admit not only that we do not know everything, but also that further interpretations may exist. Thesis and antithesis, this is the process towards knowledge. Reading your Homer, a series of reflections have been triggered that have never been considered before today”. Giovanna Albi, Greek scholar and literary critic: “It's brilliant”. Barbara Bubbi, science popularizer: “You have a fantastic sense of humor, which can also be perceived very well from your books. Yours is a treatise of extreme interest, and only good writers can explain complex topics in a simple and fun way ”. Giovanni Anzidei, Head of the Accademia dei Lincei press office: “A great book, and it must be said loudly!”. Guido Cossard, archaeoastronomer: “Extremely interesting theory, and very well argued”. Enrico Banfi, former Director of the Museum of Natural History in Milan: “I won't go into the merits of other issues, but the naturalistic part is perfect”. Giulia Benati, Director of the Milan Cathedral Museum: “In one word: beautiful”. Giulio Calegari, palethnologist-artist. “What would myth be if it were not possible to dig into it to find, as in the archaeological layers, always new truths? Dreams that only the past can suggest, to allow us to look further and further away, on that horizon where scientific truth and poetic truth coexist. Perhaps it is this elsewhere that Alberto Majrani tries to grasp. This is the power of the myth: opening up to infinite stories that one must know how to grasp with amazement and sensitivity. The ancient bards would thank you! ”. Paolo Colona, astronomer: “Some of Alberto's studies are examples of beautiful archaeoastronomic research. And then Majrani has a talent: he is the only one I know who is able to subvert accepted and shared knowledge, starting from details for all to see, without making mistakes, potentially getting it right; he proposes annoyingly irrefutable theories! ”. Emanuele Properzi, Scrittorevincente.com: “Majrani is proposing to the publishing world an extraordinary project for originality, ambition and solidity of contents”. Teodoro Georgiadis, CNR researcher: "I liked your book very much, your reading is really intelligent, very well constructed, it forces you to go much deeper, to look for correlations, and it does an important thing for the Greeks: it keeps the fundamental interest that must be had for this story of the human race ". Ettore Brocca, Mangialibri.com: "Thanks to a remarkable argumentative ability, the author wears the devil's advocates toga to support the thesis that it was not Ulysses who killed the suitors, but Philoctetes! And we are certainly not faced with a literary divertissement studded with vacuous opinions ”. Felice Vinci, author of The Baltic Origins of Homer's Epic Tales "Many books have been written that took their cue from mine, but 'the best' is yours!" Daniela Toschi, psychiatrist: “I had always been troubled, since school, by certain discordant notes; as well as certain forced psychoanalytic interpretations of the myth. This theory made me rediscover an even more fascinating Odyssey”. Librieletture.com: "A serious study that reveals surprising possibilities, like a thriller, really intriguing and very pleasant to read ". Giuseppe Zanetto, Greek scholar, State University of Milan: “Dear Dr. Majrani, thanks for the email and thanks for the pdf of the book, which I will read with pleasure (as I read the first version, which you sent me in paper form). The Odyssey is a wonderful book, which contains a thousand stories, a thousand scenarios, a thousand truth. In almost three thousand years it has offered material and inspiration to many people: poets, philosophers, mythographers, ceramographers, artists and intellectuals of all kinds. I too put myself in the group: I am guilty of a rewriting of the poem intended for young readers. But the most beautiful thing is that over the centuries the Odyssey has given each of us, its followers, joy, fun and a bit of legitimate pride: because we all found "our" truth within it, which all the others had missed. From Homerist to Homerist, I send you my warmest greetings”. Eleonora Cavallini, Greek scholar, University of Bologna: "You write very well, you have a strong sense of logic and you have certainly read the Homeric poems very carefully, and I like this". Giuseppe Girgenti, Professor of the History of Ancient Philosophy, Vita-Salute San Raffaele University, Milan: “Convincing thesis”.